“Mom!” yelled my daughter, Cara, who I thought already left for school with her sister. I was running late for work, again, and failed to answer. I was looking for a warmer pair of  gloves for the upcoming polar vortex due to blow that January afternoon.

I kept digging through my closet when Cara barged into my room.“Mom. We have a problem.”

I said,“What else is new? Why is your face so red?” I touched her cherry Popsicle cheeks.  “Where is your coat? Here, do you need these gloves?”

She took the mismatched gloves, one red thermal and one black wool, and interrupted my interrogation.“I ran over the crab.”

“You say it like I’m supposed to know what you’re talking about. Is ‘I ran over the crab’ code for something?”

“No code. I backed out of the garage, and the crab sandbox got stuck under the car. I think they’re frozen, together.

She made no sense, speaking as if that plastic crustacean were alive, crawling around the garage. I looked out the window to our driveway, and sure enough, there it was, spanning the width of the tires, halfway burrowed under the Lexus. It reminded me of ruby slippers sticking out of Dorothy’s fallen house. 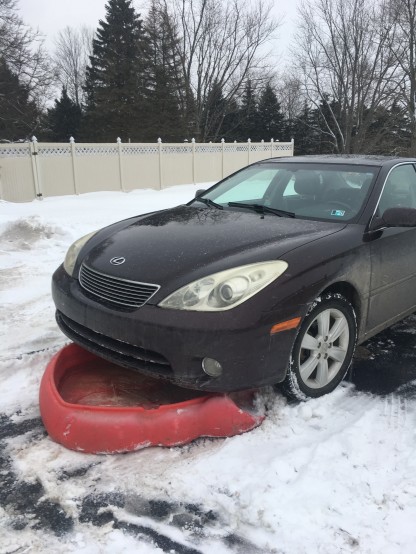 “Mom, I already told you. Can’t you just help? It’s not the lid, just the sandbox part.

“Well, that makes it better.” I trudged out to the snowflake covered beach to the buried sandbox. Buckets of snow started to fill the exposed half.

I kicked the thing with my boot, but it didn’t budge. I tried extracting it with my bare hands, flaming red like boiled lobsters. Cara, standing on the sidelines, snapping action shots with her phone said, “Can’t I just drive to school with it attached? The car still moves. It’ll be like a parade.”

I gaped and said, “There’s something wrong.” I got into the driver’s seat to put the car in reverse then forward several times, ebbing and flowing to detach the crab. Elena, my fourteen-year-old daughter, still seated in the heated passenger side, was fuming. She said, “I’m going to be late for school.”

“Well, you’re a teacher. You won’t get detention for being tardy.”

I was about to blow enough steam to make a polar vortex feel like a summer squelcher but paused, hoping for a reasonable explanation about this situation.

“Elena, do you know how this happened, how your sister managed to wedge this colossal childhood toy under this vehicle?”

I plucked out her earbuds. “Do tell.”

“Do you have to use that piercing voice?” Elena laughed her nervous laugh most when I spoke like a calm, soprano Nurse Ratchet. She knew, at any time soon, one could fly over the cuckoo’s nest and one’s tone could change to echo that of a terrifying talking tuba.

“When dad cleaned the garage over the weekend, he put the crab near my car door. It was  in my way, so I moved it and stood it up against the wall.”

“The one in front of where Cara parks. When she and I got back from the game last night, the crab was on the floor, like it slid down the wall. By the time she realized it was there, she already ran it over.”

“This happened last night? And no one thought to tell us?”

“Well, no. The tires didn’t run it over or anything. It just ended up under the car, you know, like a lost tennis ball.”

“Oh my my! This is not like a lost tennis ball. The damn exhaust must’ve caused the plastic to melt and weld itself to the car.”

“Who knows? You guys really need to get rid of that thing though.” Her eyes widened as if she couldn’t believe what she was saying. She giggled more, and I was snapping, crackling, and popping, and…

Just then the girls’ school bus came through. It would loop around our neighborhood, then pass our house again in about a minute.

I whisper growled, “Get out!”

I laughed like a lunatic then seriously demanded, “Get the hell out of this car and ride the bus, forever. Go to the end of the driveway and don’t look back. You will regret seeing what you two have done to your mother.”

Elena grabbed her and Cara’s backpacks and did exactly what I said, for once. They both frantically ran to the bus and safely boarded it. Before doing so, Cara, who missed the message, looked back, shrugged, and waved with one thermal red glove. I couldn’t bare to lift my hand to say one more goodbye.

I turned off the car, stepped back into the wind, and stared at the scene. I imagined how this could pass for an innovative snowplow and how “fun” Cara would have thought driving it to high school would have been. But there hadn’t been anything new or purposeful about the sandbox for years. I should have given it away when my kids outgrew it but never did. 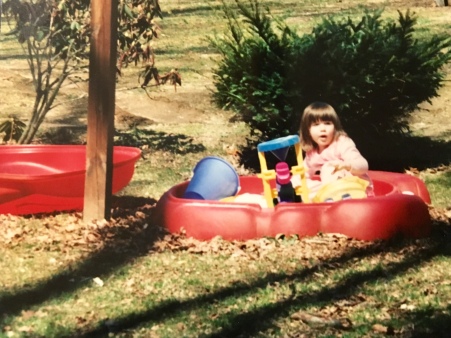 Prior to buying a sandbox for my toddlers, I read reviews galore to find the best a mother could. Playing in the sandbox was my favorite childhood pastime, so we needed enough space for me, my shovel, and bucket. That morning, I tried to pull it back to me, one last time. I yanked on the claw, which doubled as a seat, cursing the five-star, mom-champ reviews recommending this durable, big ass crab box.

I gave it a final kick, got into my car, and called my school letting them know I’d be late because of car troubles. Then I called my husband, Harry, explaining the best I could that there was a crab sticking out of the front of the car. And oh yeah, that Cara was maturing, so she shed her shell and Elena was on her way.

“What crab? What shell?” he asked.

“I tried to catch their childhood but I had to let go. My frozen hands hurt and I couldn’t wave goodbye…”

That evening, during the polar vortex, Harry sawed and blowtorched the sandbox from the car. Thankfully, he had his warmest gloves, a matching pair.

The crab ultimately ended up in a Waste Management dumpster. I like to think it was released back into an ocean of recyclables where I hope it regenerates into a new toy for another childhood.

P.S. Not all keepsakes end up trashed. You can read about a special one, Mr. Bunny,  that survived here in Good Night, Room: From Nursery to Dorm.