Our local Walmart is a store where customers habitually shop in their pajamas.  I admit, that I have judged this as a fashion faux pas, thinking jammies (especially those with Ninja Turtles and SpongeBob) don’t belong in public. After I had to parade around Walmart in a bathing suit, I would gladly trade a two-piece for PJ’s, preferably a one-piece zippered fleece number with built in feet. 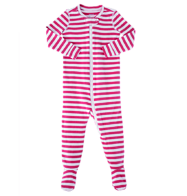 END_OF_DOCUMENT_TOKEN_TO_BE_REPLACED

On January 2, 2018, I took down my 2017 Bruce Springsteen calendar and reflected on the past year. That eve, I thumbed through the pictures of The Boss and pages of my celebrations, holidays, events, and milestones. I wish I could report that I reminisced with a cup of cheer and shouted a “New Year, New Me” proclamation, but you can scratch that from the script. Instead, I continued brooding over last year’s heartaches, the ones I’d erase if only I penciled them in. I ended up building a bridge for unscheduled griefs and leftover letdowns to crossover to and stain my new Peanuts Gang, “Happiness is…” calendar.   END_OF_DOCUMENT_TOKEN_TO_BE_REPLACED

There are certain food and drink combinations that have universal appeal.  These pairs of flavors are my personal top-ten taste-bud tempters:

Milk and six Oreos dunked for twelve seconds (If you use skim milk, go for the Double Stuf.)

Starbucks coffee and donuts so thickly glazed they hurt my teeth

That’s right, my number one pick is this wine and food pairing. The cracker in itself is a combo of baked Pepperidge Farm goodness sprinkled with the precise amount of cheddar. Cabernet Sauvignon is a full-bodied dry red that explodes with complex quality and smoothness.  There is no better half, since, in a partnership, each brings out the best in the other.

Over a decade ago, I discovered how good this was while I was packing my kids’ school lunches.  That night, while enjoying a glass of red wine, I filled their Tupperware boxes with Goldfish.  I was then on a heart healthy diet that encouraged a daily glass of red wine, which I was still acquiring a taste for.  I munched on a few crackers while sipping cab and discovered a divine unification of tastes.  I was surprised how much the cheddar in this adorable, kid-friendly snack evoked the strong tannins and oaks in my wide-mouthed glass.  Conversely, the velvety red liquid melted the cracker crunch into a blend of salty and bitter-berry bliss.

It was then that I poured a fish bowl serving size of 51 crackers containing 140 calories and another glass of cab at 120 calories. I tipped my glass and feasted on cheese and crackers all mixed into one smiley snack. As I swallowed and savored, I fancied myself at a classy party and raised my pinkie.   Holy mackerel! Nearly 300 calories later, I became the hooked fish.

I continued my daily dose of wine, and my purple-stained mouth came to expect a school of Goldfish to swim in it.  The more I got used to the wine, the more I wanted the crackers.  After eating 51 fish, how could I have room for more?  Well, I’m honest, so I confess that there have been times when I gorged on 204 crackers and an entire bottle of wine! During those moments, my pinkie drooped while I sucked the cheese off my other fingers. Classy.

Drinking the crumbs from the bowl, I was drowning my diet.   My flesh was too weak to give up my wine and cheddar flavor blast though, so to avoid becoming whale size, I became a runner.  Every four miles run shed a glass of wine and two servings of Goldfish calories that would have stuck to my gills.  Will run for wine!

I tried to justify my intoxicating gluttony with religion.  What would Jesus do?  He fed the masses with fish and turned water into wine.  I realized I was misconstruing the Bible to work for me. Out of guilt I tried giving up the Goldfish for Lent, but when everyone would “sacrifice” by eating fish on Fridays, I was overcome with temptation.

Today, 10 years later, I continue to be tantalized, mesmerized, and hypnotized by this taste-bud dancing duet. I’m older and wiser and know if I stick with just one 6 oz glass I can avoid my crazy craving for crackers.  It’s a struggle to repress my palette’s desire, but I have learned to moderate.  Of course, there are times when I dive in and have a buzzing cheddar blast doing so.