In remembrance, give thanks.  Those are the profound words that stir my heart and soul every Memorial Day.  Over the 2013 Memorial Day Weekend, my family experienced a mini-miracle.  For years I hoped to recover something we lost in 2006.  Here is the tale of lost crosses, faithful reunions, and thankful memories that are eternal.

My husband, two daughters, and I moved into our current Northwestern Pennsylvania home eleven years ago.  After unpacking a houseful of possessions, I was extremely upset over the sentimental loss of our girls’ *Orthodox baptismal cross necklaces.  Cara and Elena’s Godparents, our dear Kumovi Bob and Diane Baron, gave each girl a gold cross on their christening days. 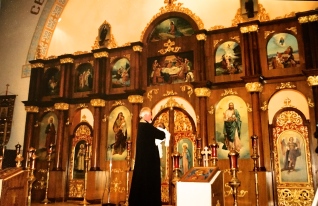 Cara’s Introduction to the Church 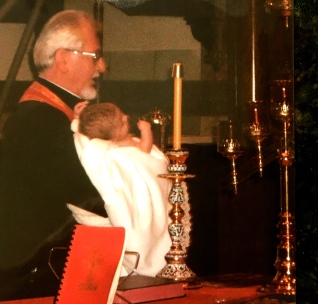 These very special, spiritual gifts were blessed by V. Rev. Father Stevan Stepanov who performed their baptisms at St. Elijah Serbian Orthodox Church. Father Stevan, the parish priest since 1973, inspired, nurtured, and guided me in my own Orthodox journey, so it was an honor that he baptized my daughters three decades later.

I blamed the loss of those precious crosses on our move.  I know the girls wore them a few weeks before on Easter, the last earthly day they spent with their Pap Frank.

My father passed away, June 8th, 2006, shortly after we moved. I wanted my girls to wear them at his funeral, but I couldn’t find them.  I looked in every box, bag, storage bin, and garbage can dozens of times without luck.

I was doubly grieved when my siblings and I couldn’t find our father’s own gold cross and chain after he died.  He loved that cross that we, his four children, gave him for a Christmas present years before.  When he unwrapped it, his eyes immediately dripped with reverence and gratitude.  He made the sign of the cross, kissed it, and hung it around his neck and never took it off.  Naturally, we wanted him to have this weapon of peace, this invincible trophy, on his next journey, but after combing and searching his house, car, and yard we resolved that we could not bury him with his own cross.

With this realization, my sister Joanne, our father’s first child, selflessly unhinged her chain’s clasp to give up her cross to be placed on him. Our compassionate funeral director made sure it shined for his last viewing and final departure.

Joanne recounts how, in the fall of 2006, she and her family were going to take my father to visit Matthew, her oldest child, who lived in Williamsburg, Virginia.   They had an autumn vacation planned together but our father left this world the season before.

My nephew had recently gotten a tattoo of an Orthodox Cross on his right arm, and my father loved it so much he vowed to get his own during his next trip to Virginia.  My father, even after having served years in the army, never got a tattoo, but at the age of seventy-six, he was determined to hire an artist to paint and color the clean canvass of his older, thinner arm.

He was proud of his Orthodox religion and humbled by the faith of his college-aged grandson who found a permanent way to wear his cross and wave the victory sign of the Resurrection.  My father never got to get his tattoo to match Matthew’s.  I wonder if there are tattoo booths in heaven.

We never did find my father’s necklace. My sister has yet to replace her own which is eternally placed next to our father’s heart.  She admits that she can’t substitute the original she meaningfully offered up to our father. Although he lost his cross and chain, he gained his daughter’s. I can faithfully imagine my father returning her special gift some eternal day.

Since 2006 I had been searching and praying for my girls’ cross necklaces back, and like my sister, I never felt the right moment to replace the crosses. I yearned for the blessed originals. Aside from my husband who helped me look for them, I never mentioned this loss to anyone else.  I was so embarrassed and regretted losing something so important given to my children.  I also carried a small glimmer of hope that, someday, we would recover their crosses.

It was Memorial Day Weekend, 2013,  and my girls (then ages eleven and nine) and I had an extended four day holiday weekend.  With the extra time off school, we were productive in and around our home. We crafted and transformed bottle caps into magnetic art, decorated t-shirts with puffy paint, cleared out flowerbeds, pulled weeds, spring cleaned closets and dressers, and delivered loads of hopeful “treasures” to the local Salvation Army.

The toughest chore for the girls (then and now) was cleaning out their rooms and choosing what to keep and to discard. They were sent to their individual clutter, while I worked on editing bits of my memoir of me and my father.  Cara has gotten much better at “weeding” her bedroom and finished with extra time for me to read to her an added scene about Pap who she loved to hear about.

Elena, on the other hand, was still clearing her chaotic bedroom ground, and I suspected it would take her three garbage bags more.  She’s always had such a vibrant imagination and crafty intuition.  It pained her to get rid of things she saw as future building blocks of fun. She rescued and resurrected recycling bin deposits as supplies for crafting-wars that she, Cara, and their elementary school friends hosted here during sleepovers.

Elena came out of her Camp-Craft-A-Mess to show us some oldies she dug up during her bedroom excavation; she unearthed many prizes during these room cleanings, her hunting and gathering sessions. She found Cara’s long-lost Cinderella knee high, a pair of Halloween footies, an unopened package of tiny-toddler-tights, and a lacy, ruffled sock all which had been missing for years!

It was time for me to guide her back to her artifact dig and help her out, when she showed me a slender white cardboard box.  I assumed it held one of her collections of rocks, shells, bottle caps, or crayon bits.  She, stalling to get back to cleaning, explained that she found the box and the socks while emptying her bottom dresser drawer that fell out to the floor.

That drawer has been a pain ever since we bought it.  Unfortunately, brand new, mass produced furniture can be chintzy, and this dresser was no exception. Harry kept making repairs to the wooden drawer slide, but it’s still off-track; when the drawer is pulled out with quick force, it’s a toe-crusher, but I never knew it was also a sock-robber.  We worked hard to remember to just gently tug on its handles.  Elena had enough hidden “gems” under her bed, in her closet, on her desk, and behind her nightstand, so the last thing she needed was a broken dresser swallowing more stuff.

She handed me the box of “stuff” with a smile, such a proud girl of her findings.  I set it on my lap and lifted the lid to the best gift ever!  There in their unpolished glory beamed the baptismal cross charms and chains! Despite their lackluster tarnish, they illuminated like renewed spring sunshine after a worn-out winter.  That missing box rested for seven years among stuck socks.

I was shocked, elated, and confused with a trinity of emotions.  I shook my head, initially doubting these were the girls’ crosses.  It’s been so long How could they have come back?  I held and stared into the cardboard box of buried treasure, entranced by the golden faith resting atop a cotton insert.  I hesitated to touch the crosses, fearing they’d vanish again, like ghosts.

Elena was just as surprised to find real jewelry instead of something she could craft into a necklace.  “Mom, what are these?” she asked.

Elena gently plucked them from the box, dangling each by its chain.  “Wow!  Are these real gold?”

“Yes, they are gold and are very precious.  Your kumovi gave these to you on your Christening days and they were blessed by Father Stevan.  You only wore them on special occassions.  I kept them in this box in your sock drawer where your coin collection and baby bracelets are.  It just seemed like a safe place.

Elena handed them to me and they did not disappear like ghosts, but sang like angels.  I made the sign of the cross and kissed each charm.  “Come here girls, lets try these on.”

“We can wear them?” Cara asked.

“Is it a special occasion?” Elena asked.

“Yes, it is indeed a special occassion.  It’s a miracle.”  I clasped the short chains that fit perfectly around their necks.  They went to the nearest wall mirror to admire their radiant crosses. I pulled them into my heart and hugged them and cried some more.

Needless to say, Elena got out of cleaning the rest of her room that weekend.

To have these back was indeed a miracle.  How special it was to find them over Memorial Day weekend; beyond picnics and parades, this is the national holiday for praying, remembering, and honoring those who served and made the ultimate sacrifice to our country.  I was certainly in the midst of remembrance as I was writing about my father.  Although he did not get taken away during the Korean War, I pray for those who did. I continue to give thanks to all those who left the world early for their service to America, and I know my father did too. 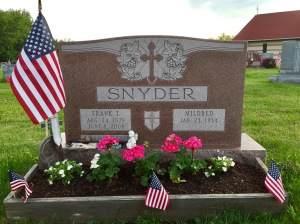 With the return of the crosses, I wonder if my father tuned into my prayers, approved of what I wrote, and sent us a sign? Or was he just giving his granddaughter a way to get out of cleaning to go climb her favorite tree with her sister?  Whatever the reason, I faithfully felt my Heavenly Father and earthly father’s presence during this blessed reunion.

Happy Memorial Day!  Memory Eternal to all of our lost loved ones, especially those who served in our American military and perished while doing so.  In remembrance, give thanks, and may their sweet voices continue to echo in our hearts and uplift our souls. Making the sign of the cross over and over, I continue to give thanks.  In the name of the Father, the Son, and the Holy Spirit.

*One of the most recognized Eastern Orthodox Crosses worn around the neck hosts three horizontal bars; the top bar represents Pilate’s inscription, “Jesus of Nazareth, King of the Jews” and the slanted lower bar represents the footrest of Christ.  The slant is said to symbolize a balance scale showing that the good thief, on the right, who repented and accepted Christ would ascend to heaven, while the bad thief, on the left, who rejected Christ would descend to hell

This three-bar cross is often surrounded by another cross of gold, silver, wood, or whatever material the cross is composed of and it’s outlined with three bumps on the east, west, north, and south beams. This is representative of the Holy Trinity.