Not last night, but the night before,

One had a fiddle, one had a drum,

One had a pancake stuck to its bum.

A couple nights ago, a variation of the above playground song came to mind.  Take note, this isn’t a cute, nostalgic story where I want to skip rope and chant rhymes.  It’s a doggone tale about a stinky tail. Something indeed stuck to one’s bum, but it wasn’t a pancake. 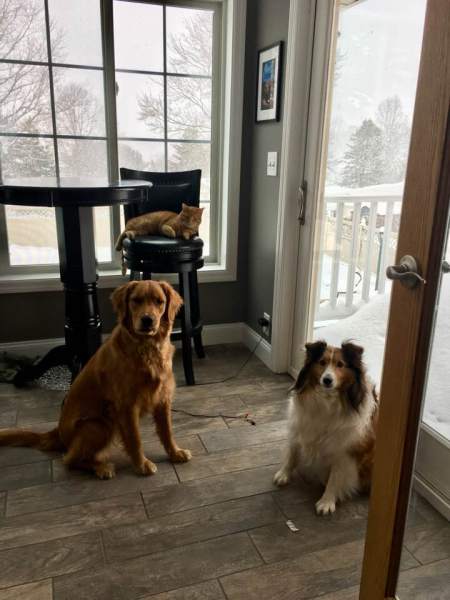 Around 1:16 AM, Frankie, our one-year-old golden retriever banged her blockhead against our bedroom door. I could tell by the clumsy klunk that it was Frankie’s clatter. I sprang from the bed to see what was the matter.

Half-awake, I ambled to the door and opened it to Frankie standing there, head cocked, as if to say, “What took you so long to answer?” 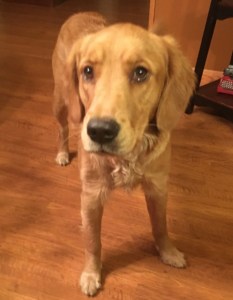 I turned on the hall light, and she pierced out her three syllable whimper followed by a tuba sounding grumble which can mean: I gotta pee, I gotta poop, I gotta puke. I gotta run. Or it can mean: play with me, feed me, water me, pet me, love me, hold me, look into my eyes, or all of the above.

I hoped it was a bathroom need. “Do you need to go outside, girl?” She scampered down the hall towards the exit to the dog yard for a late night potty run.  I noticed that her long flowing feathers, her furry orange and white “pants”, finally grew in covering her bum and hind legs.

I couldn’t believe she was already a year old, seven in dog years. Big brother Louie, the sheltie, rose from his pillowed spot on our floor and sluggishly followed her out.

Geppetto, our new kitty, startled me when he ran out of the sunroom and chased after the dogs. Evidently, my girls, the last ones up, forgot to put Geppetto in the basement where he is supposed to retire for the night.

He’s slightly nocturnal, so he’s not to be upstairs tempting Frankie to party all night. Louie, a loner, doesn’t care to be bothered by either of them.

I carried Gepetto downstairs while the dogs did their thing. They were reluctant to come in from another “fun” Pennsylvania snow storm, so I unloaded the dishwasher and let them run around a bit more. I eventually lured them back in with treats. Louie crashed in the corner of the  hallway on the fuzzy dog rug. Frankie ran back to our room before I could dry off her feet. Ugh! She leapt into our bed and planted herself on my side. The last thing I needed was a snowy, slush puppy dampening my spot. I just wanted my warm bed until…

I breathed in a horrific odor that permeated our room. I nearly passed out from the potent stench like that of a thousand piles of canine poo simultaneouly dropped on a sultry summer day. I didn’t think Frankie would smell that way, since we started treating her extra sensitive belly with salmon dog food for sensitive systems. I approached the bed where Frankie thumped her tail and realized the odor was more than dog gas. I yanked Frankie’s collar and pulled her off the bed. I turned on the light.

I found dog doo debris frozen to Frankie’s feathery flowy pants. One had a pancake stuck to its bum. “There’s poop on her pants!”

“There’s a poop stain on the sheet!”  Disgusted, we stripped the entire bed to be laundered. It was either that or burn it. 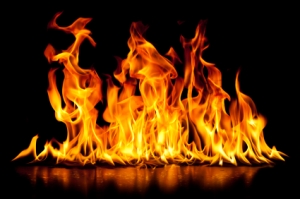 Then I had to launder Frankie. I locked her in the bathroom with me and coaxed her into the tub. I closed the glass doors to prevent her escape while I got my supplies: dog shampoo, rubber gloves, and some towels.  Of course, I couldn’t find the pet soap but didn’t want to scrub her with the girls’ Forever Sunshine Bath Gel and risk her having a forever skin issue. This puppy already caused enough disruptions to my rest, olfactory nerves, and sanity.

Then I realized that the rubber gloves were under the kitchen sink. “Frankie, sit.  I’ll be right back,” I cooed while she whimpered thrice and tuba grumbled once to get the sam hill out of there. I retrieved the gloves and found the purple bottle of dog shampoo behind them. Finally, a stroke of good luck.

I unhooked the shower head hose and sprayed Frankie’s behind with warm water.  She stood like an angel (about time) and let me scrub her sudsy bum to get rid of the grime. There was no need to wash the whole dog, and she didn’t seem to mind the partial bath. I gave her a final high pressure rinse to the rear, like a bidet.  I toweled her off , unlocked the door, and set her free.

She’s always hyper after a bath and barrelled out, speeding back and forth down the hallway, back and forth, back and forth… Her wet feet caused her to slip and halt for a moment to notice Louie, minding his own business on the pet bed. 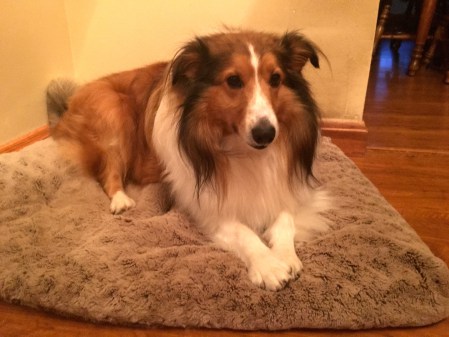 Frankie clenched her teeth onto the bed and pulled Louie down the hall. Louie bailed from the unwanted carpet ride and retreated back to our room.

I left Frankie’s wet arse, followed Louie, and closed the door behind me. I lay down on the monkey printed sheets Harry found in the closet and covered up with a throw blanket.

Louie and Harry snored in unison while I tossed and turned, fading in and out of sloppy sleep. I was already looking forward to going to bed tomorrow night.

Tomorrow night came and I got four solid hours of rest before Frankie woke me again (Ever since we got the cat she’s been restless.) She nuzzled her face on my protruding hand. I patted her head and scratched behind her ears then she burped right in my face! She has a way of ruining the moment. Her breath reeked of fish from stinky salmon dog food for sensitive bellies.

Really? What about my sensitive belly?  My sensitive nose? My sensitive everything?  This puppy is making me quite sensitive! Frankie squeaked her three piercing whines then tuba grumbled.  Doggonit! I just wanted to stay in my fresh Blue Sparkle Snuggle scented bed. I figured she needed to go outside.

We got out to the hallway and she darted for the bathroom and jumped into the tub, you know the one I had to coax her into the night before? She stretched out and lay there. “Frankie!  What are you doing? Get up! Get out of there!” She sat and started licking the mesh sponge. “Frankie, let’s go!”

She looked at me with pleading eyes that seemed to say, “Please bathe me again.  I like the spa treatment. My butt has never looked so good. Don’t use gloves this time.  I want you to really dig in with your nails. I know you can do better, mama. And make the water a little warmer this time.  Don’t wash my head either. I like a part-time bath, and you should…” 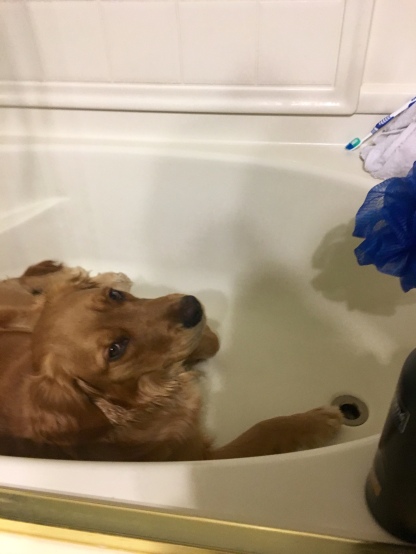 I flipped her off and walked away.  I locked my bedroom door, put on headphones, and let Bruce Springsteen sing me back to sleep. I have no idea how long she stayed in the empty tub, nor do I care. 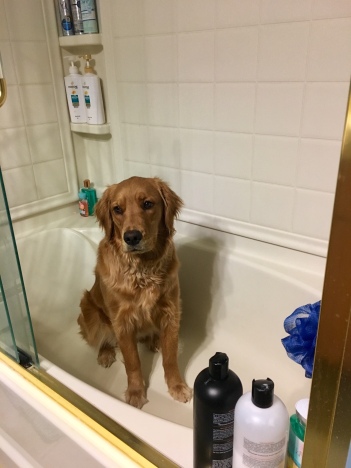 I’m not uncaring, just dog tired. Maybe tomorrow, I should go sleep in a tub, one that is miles and miles away from fur, and poop, and fish burps.

But then I would miss the zoo and the unconditional love, joy, and laughter our four-legged friends offer.  Happy National Puppy Day!

Last night came after the one before,

No tomcats came knocking on the door.

But a feathery pup who “acts” a bit dumb

Jumped back in the tub to get a pampered bum.